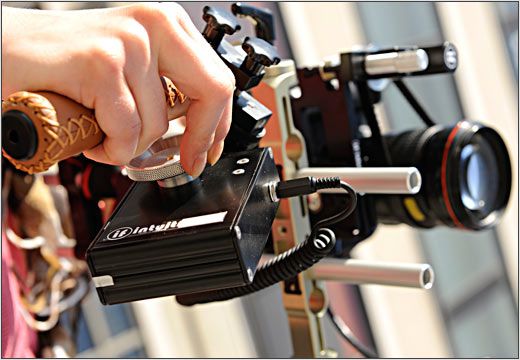 Follow focus is to Hollywood, for HD-DSLR is to filmmaking, Intuitfocus HF-IF1 is the 5D of HD-DSLR follow focusing:

The IF system can be used on all DSLR cameras with lenses from 14mm to 600mm, including shooting with Zeiss still or compact prime lenses. The IF system is easy to mount and is compatible with most lenses, and enables one to focus or to zoom precisely and quickly without any camera shake.

This thing about focusing will go away if camera makers solve the root problem. SLR cameras are designed to capture still photograph; our current focusing technology was based on a two-decade auto-focus problem, now that most DSLRs can also be used to shoot videos, a new auto-focus system is needed to solve this new problem.

Abstract: Detecting an object from the viewfinder, instead of snapping to a focused position, the system would identify movements, and from the distance, direction, speed and sets of moving patterns; calculate and predict a focusing point that would be maintained, and/or gradually shifted according to the position of the object and the camera’s film plane. Add to it, the existing image stabilizing technology, super-sensitive image sensor capable of high-ISO & wide dynamic range light capture — filmmaking will never be the same again.

Okay, that sounds like crazy sci-fi sensation, but remember a few decades ago when auto-focus, auto-exposure, hypersonic-wave focusing motor, were nothing but a dream? As many optimists would say, everything is possible as long as we can imagine it.

Postscript: Now that we’re talking sci-fi, has someone devised a non-linear digital image sensor that has “memory”? A sensor that not capture a single linear moment of image, but record a non-linear memory of the light itself? This would result in a truly RAW state so that the photography can be done entirely post-capture — think of a darkroom enlarger but with multiple negative films with infinite combinations of ƒ stops.

It would completely ruin the beauty of photography, but it’s no crime to imagine for a bit, no?